What is Feral Poetry? 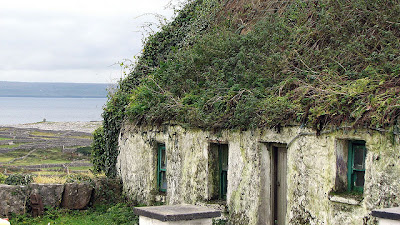 My great-grandmother's house is gone now.
Nothing left but farmland
returning to old habits,
and a few outbuildings as vague reminders
of once-human habitation.
The fallow fields emerge,
a mandala of sweet pea and poppy,
summer scents swaying
with the delight of their own pollen
and everywhere there are saplings,
a silent people moving slowly.

In search of heirlooms,
I enter an outbuilding subsumed in kudzu
and find a box--
empty
soaked through with rain
and the floor’s damp compost.

Hands clutching soil,
I walk out into the sun,
mind like milkweed

I take off my clothes and sit
in the waiting grass.

Feral poetry is a poetry of succession ...
and as such, it embodies this ecological power. Succession, the cornerstone of all ecosystems, is the transformational process which turns barren, disturbed places into rich biodiverse habitats. Primary succession occurs when some original disturbance such as a lava flow, glacier,  or earthquake create or expose new rock or "land" to the surface. Gradually, soil forms and then come the mosses and more soil, then shrubs and saplings with small animals, and on it goes depending on climate, altitude, and other variations. Secondary succession is the same process, but occurs when some other event such as a fire destroys or lessens the original biodiversity ... if nothing else drastic happens, that ecosystem re-stabilizes itself as plants grow back, animals return, etc. This cycle of succession has happened millions of times (if not billions) in the Earth's history, and it is one of the primary models against which we can evaluate change and evolution, be it of a solar system, planet, continent, bioregion, culture, family, or even individual. Our individual lives too swing and sway in the balance, a sine wave of crises/peak experiences and gradual adjustment or change. Essentially, succession is evolution at work in the cosmos.
But then how is Feral Poetry a poetry of succession? What does that mean?

Well, first we need to examine ideas like "feral," "wild" and "natural." The word "feral" itself derives from Latin "ferus" (wild), but today refers to something (usually livestock or crop) that has returned to the wild after a time of human intervention and domestication. Note though that I did not say "returned to nature" as such an idiom reveals the dualism inherent in our language where we pit "man versus nature" and "civilized versus wild" all the time. As much as we may think we are, humanity can never be separate from the natural world, not even our man-made machines or synthetic clothing. These too are part of the "natural world" because they, just as we, are derived from this Earth, from its chemical compounds, metals, materials and laws.
We can though view ourselves as separate from the Wild, safe in our fabricated houses and so-called "civilized" ways of living. We have the Internet, electricity, fast travel and greater comfort. The  history of human evolution from the savage dark ages into today's enlightened, civilized era is called "progress," and in the name of "progress," we overpopulate, overuse and overconsume until the Wild (when a natural balance can gradually emerge) is taxed to the point of strain, species extinction and systematic destruction. Yet in succession, all of this is mere "disturbance." Our rare and beautiful planet will reach a climax (at what great cost, who knows), allowing primary or secondary succession to begin anew.
These cycles are inevitable to some extent. There has always been some upheaval happening on Earth ... that is a sign of life, change and evolution. I very much doubt that humans are here to stay, in the long term (e.g. billions of years from now) but that doesn't give us license to speed up our own demise and that of thousands of other species in the mean time. Such behavior would be deemed psychotic, and yet we see nothing insane or ill in how our societies function and (temporarily) flourish off of self-destructive habits.
We need to change those habits and modes of living so that they are mutually enhancing to both the human and more-than-human communities. And as psychology shows, to change behavior, we must change thinking ... change the way we see the wider Earth Community and our place in it, the place where we have always belonged. One of the most thought-transforming tools available to our species is that of Art. Art moves beyond logic and reason into a wide open field of mystery, wonder and beauty. Language too directly shapes our thinking patterns and storytelling, as any sociolinguist could tell you. When Art marries Language, story and poetry are born. With story and poetry, with that creative marriage between the left and right brain hemispheres, somehow new things emerge--new concepts, new paradigms, new revolutions. We give birth to ourselves in deeper, fuller ways than before conceived. This is the place of Feral Poetry:
creating new Stories and Poetry that re-align our thinking, seeing and feeling with the Wild.
It's about learning to re-inhabit our place in the Earth Community.
This is why Feral Poetry is a poetry of succession ... and although it is successive, it is not regressive. We can never go back. Once altered by our experiences, we are forever changed. Instead, we are left with following the Wayless Way ... that is, the ever immanent presence of the Present. As such, Feral Poetry is composed with an alive awareness to the "now"--to reality as it is, not as the writer imagines it to be or would like it to be. Such requires true vision ... not the powers of "envisioning" or "revisioning" but cutting through our fallacies, metaphors and misperceptions to see the Truth behind the Story. In the Eastern sense then, Feral Poetry is Vajra Poetry, poetry as hard, beautiful and cutting as diamonds or as destructive, transformational and brilliant as lightning. Such poetry doesn't have to appear cutting or brilliant to be vajra though. Feral Poetry can also be fleshy, earthy, gentle, silent, dark and moist ... but at its core, there is the edge of truth. It's poetry that defies what you would expect and doesn't care what anyone thinks, but says what needs to be said instead of hiding behind the embellished mask of convention. It cuts through the quagmire of ego and persona, unconsciously aiming for that elusive originality, its secret strength.
Feral Poetry is more concerned with being itself than being defined. This means that although it may be described, it can never be defined because its borders are always shifting like the tides .... it is unpredictable, unexplored, and unclaimed. Attempt to define it and you cage it like a beautiful songbird who will never sing its fullest repertoire as it would in freedom.

To be wild is our original blessing …. not our original sin. We were a part of this sensuous and overwhelming world, not separate.

How do you describe Feral Poetry then?
The description will be different from person to person, but I most easily describe it as: wild, heady, unselfconscious, free, independent, interdependent and innerdependent, unpredictable, truthful, unembellished, direct, hidden in everything, erotic, natural, phenomenal, surprising, creative, fecund, explorative, expansive, undefined, inexplicable, down and dirty, uncut, pure, rough, timeless, personal, subliminal, liminal, beautiful and ugly at the same time, contradictory, simplistic, soulful, crazy, insane, odd, synchronistic, potent, piercing, revolutionary, magical, original
Where does Feral Poetry come from?
Where does it not come from, is more to the point. It most often arises out of the sub/un-conscious realms but can be used consciously to great effect. Free verse or rhymed, ballad, sonnet, muse or rap ... Feral Poetry can be anything and anyone, and defies all boundaries, although sometimes it uses these to its own advantage.
Is Feral Poetry similar to any other ideas and practices?
Some ideas and systems of thought which I've found compliment and make sense with Feral Poetry are: Eco-Psychology, Dharma (Shambhala) Art, Keats' idea of Beauty, Coleridge's degrees of "Imagination"... Chinese concept of the "Dao" ...
Poets and philosophers who work along the same lines:

"There is a tame and also a wild side to the human mind. The tame side, like a farmer’s field, has been disciplined and cultivated to produce a desired yield. It is useful, but limited. The wild side is larger, deeper, more complex, and though it cannot be fully known, it can be explored. The explorers of the wild mind are often writers and artists. The “poetic imagination” of which William Blake so eloquently spoke is the territory of wild mind. It has landscapes and creatures within it that will surprise us; it can refresh us and scare us. It reflects the larger truth of our ancient selves, both animal and spiritual." Gary Snyder, Writers and the War Against Nature, © Resurgence, Issue 239 (Nov/Dec 2006) http://www.resurgence.org

"Just once, let what is in your care grow wild/ enough to see the world through its own eyes." Jason Kirkey, "Conversations with Maple"